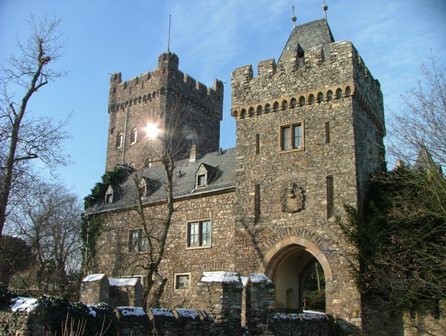 Dominant building in the town and seat of the municipal government.

The Kloppberg (Klopp Hill) is the perfect place for a castle or fortification. The entire hill was once part of a defensive belt surrounded by a wall, in which the small town of Bingium was also located. In 355 CE, the fortification fell victim to the Alemanni. The following centuries badly affected the hill. Castles were built and destroyed. In 1282, the name of Klopp Castle was first mentioned in an official document. Klopp Castle was destroyed several times in wars, most recently in the War of the Palatinate Succession in 1689. The picturesque ruin became a popular destination during the era of Rhine Romanticism. It was not until the middle of the last century that a wealthy merchant, Ludwig Cron from Cologne, began the lavish reconstruction work. In 1897, the castle came into the possession of the town of Bingen. Since that time, it has been the seat of the mayor and the municipal government. Badly damaged in World War II, the castle has become one of the town’s most beautiful landmarks again.