Orientation in times of climate change

Hildegard can be approached in many different ways, and one's own world view almost always plays a decisive role: "What do I think about religion? Is the prophetess of Rupertsberg a role model for me? Do I want to live according to the principles of 'Hildegard medicine'?" Everyone is invited to find "his" or "her" Hildegard von Bingen today. The all-round "right" Hildegard for every approach and to everyone's (or woman's) taste probably does not exist. However, there is hardly any difference of opinion on one point: For one of the greatest challenges of our time, dealing with climate change, or even better: limiting climate change, Hildegard of Bingen, with her view of the world and what holds it together at its core, can be food for thought and provide orientation even in the 21st century - across all party lines, denominations and (almost all...) world views. 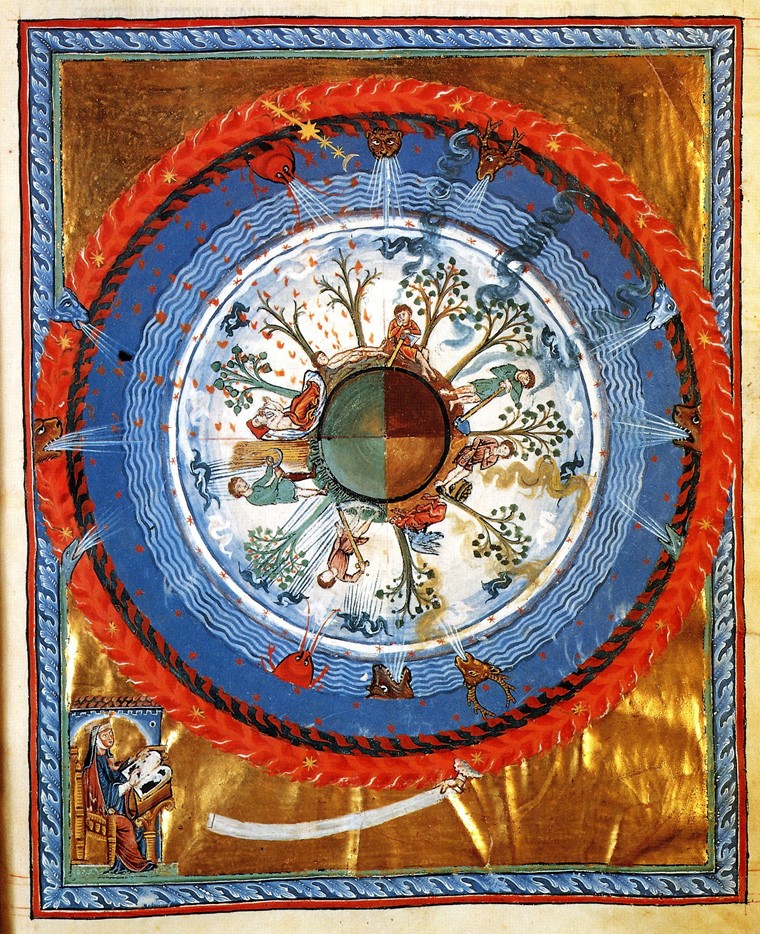 "Whole ecosystems are collapsing. We are at the beginning of a mass extinction and all you can talk about is money and the fairy tales of economic growth that will last forever - how dare you? [...] How dare you continue to look the other way and come here and say you are doing enough when the necessary policies and solutions are still nowhere in sight. [...] You are still not mature enough to tell it like it really is. You are failing us." - With these drastic, accusatory words, Greta Thunberg, then a 16-year-old climate activist, addressed the participating heads of state and governments around the world at the UN Climate Summit in New York in September 2019. Such pointed messages as well as her courageous, uncompromising appearance earned the young Swede a high degree of attention in Western society and made her a symbolic figure in the fight against climate change. To avoid CO2 emissions as much as possible, she travels by train, electric car or sailing ship even to far-away conferences and protest events to speak in front of large crowds. In doing so, she energetically appeals to the responsibility of politicians to ensure the life of future generations in an intact, "healthy" environment and demands immediate action from decision-makers in the sense of a considerable intensification of climate protection efforts worldwide. Her sometimes apocalyptic descriptions of the current state of our Earth - at the World Economic Forum in Davos 2019 she warned: "I am here to say that our house is on fire" - inspired and mobilised thousands of children, young people and adults, but also prompted the historian Niall Ferguson to question Greta Thunberg in her scientific claims and to critically describe her as a "leader of an end times and redemption movement". 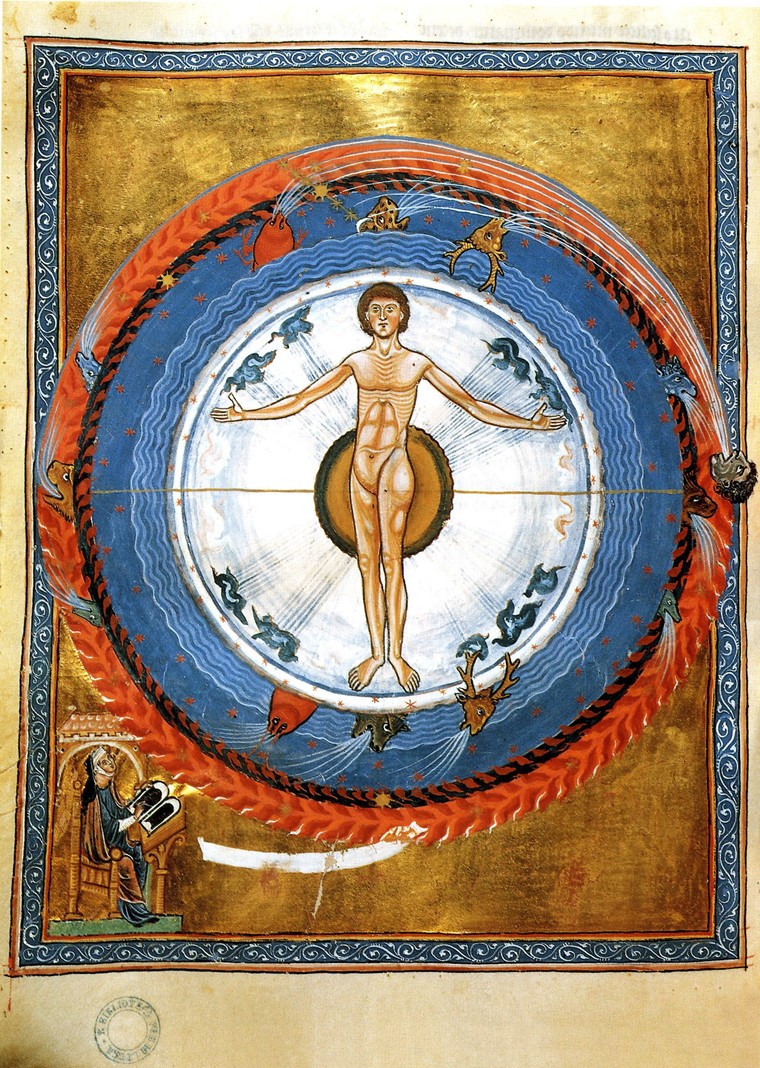 When Hildegard von Bingen (1098-1179) undertook several journeys between 1160 and 1170 in order to raise her voice in the larger cities of the empire, just in time before what she assumed to be the end of the world, as an admonition against the oblivious clergy, the influential first estate of the medieval society of estates and responsible for the salvation of the people, she was in the final phase of her life. By foot, by horse, ship or carriage, the Bingen abbess travelled to Mainz, Würzburg, Bamberg, Liège or Metz, covering an average of 25 to 30 kilometres per day. In Trier and Cologne, she reproachfully addressed the clergy, who - with devastating consequences for mankind - would fail in the performance of their spiritual duties: "You are night breathing darkness, a stiff-necked people who no longer walk in the light because of your prosperity [...] You only see what yourselves have produced; you only do and leave what you like at the moment [...]. You do not even have eyes in your head, because your works do not shine to men in the fire of the Holy Spirit; you are not able to set a good example. As the winds sweep over the earth, so should you be a spiritual storm [...]. But with your empty posturing, at best you scare away a few flies in summer." Hildegard saw the reason for the serious failures of the pastors in their striving for material goods: "For the sake of disgusting money and avarice, you no longer even educate your people, with the silly excuse: We can't do everything after all! And so the people scatter and do as they please in everything."

Greta and Hildegard are both harshly critical of the powerful of their time, who - in their view - are recklessly endangering the well-being of the people through negligent behaviour. The consequence of this for both is an energetic call to repentance.Inhalte hier einfügen. Dann OK drücken.

Hildegard assigns a decisive responsibility to the individual human being: for as the creator of the world, God is the unique "master craftsman"; but the human being, perfectly created by God, has the important role of his "workman", who is able to work and shape independently in this world. Hildegard sees the world itself as the exile granted to man by God after the Fall. Especially in her third great visionary writing, the "Liber divinorum operum" ("The Book of Divine Works"), the visionary draws a detailed picture of the interconnectedness of man with creation as well as of a harmonious interrelation of all living beings. It says: "[God has] surrounded and strengthened man with everything and has infused him with all-round great power, so that the whole creation would assist him in all things. The whole nature should be at man's disposal, that he may work with it, for without it man can neither live nor exist." His dominant position as the crown of creation is explained by the fact that only man was endowed by God with a rational soul. This gift of reason helps him to know what to do and what not to do. Hildegard derives man's special responsibility for conscientious action towards his environment from his exceptional constitution. The relationship between man and creation is characterised by mutual dependence, according to the divine plan man has direct access to everything earthly. The earth, however, "is the treasury for those who live on it“.

According to Hildegard, however, freedom is a constitutive part of the human being, so that each individual must always decide anew for the "right deeds" in the field of tension between good and evil deeds. If he succeeds in this, "the elements also have their right course; but if he performs unjust works, then he directs the elements towards himself with punishing affliction." The admonishing visionary thus places right action at the discretion of man and demands a conscious decision on his part.

Greta Thunberg also emphasises this choice. In April 2019, she said in London: "Humanity is now at a crossroad. We have to decide now which way we want to go. How do we want to shape the future living conditions for all living species?" According to Hildegard von Bingen, man can only find salvation in harmony with nature. In the "Liber vitae meritorum", the "Book of the Merits of Life", there is a possible guide: "God has arranged all things in such a way that one should take account of the other. The more one learns from the other, where he knows nothing of himself, the more knowledge grows in him. Therefore, through science, he has eyes to watch over himself, so that he does not run into danger and risk himself in it. For if man did not take heed, whom could he command by his commands? Which creature would obey him, and what else in creation would serve him? With the help of nature, man puts into action what is vital for him“.