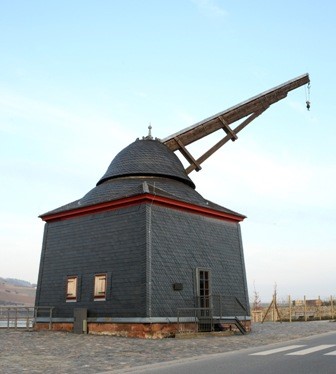 Long-serving and preserved in its original form – the old Bingen harbour crane.

The precise date of construction has only been known since 2007, when the inscription plate was discovered on the crane’s foundation: the Old Crane was built in 1487 – as the first verifiable land crane on the Rhine between Mainz and Cologne. In order to load and unload all ships, the chargeable use of the crane had been mandatory since the Middle Ages – giving the crane concomitant importance as a source of income for the Cathedral Chapter of Mainz (which administered Bingen at the time). As the crane was subject to substantial wear, it was frequently repaired. We know it was entirely rebuilt in the 17th century. The wooden construction, which is still preserved today, dates back to the years after 1787. The Old Crane, which was located directly on the shore and continued to operate until the Rhine bank was raised in 1890, was completely restored as a fully functional system between 2005 and 2007. The crane was powered by men running in two large wheels. The upper part of the dome with the cantilever can be turned with a large beam. Primarily, wine, salt and grain were loaded here. Bingen had the staple rights for the latter two. On the occasion of the State Garden Show in Bingen in 2008, the crane was placed on the waterfront again by building a small port basin.