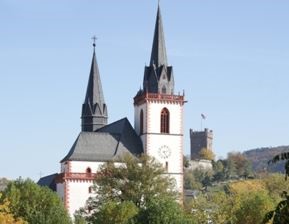 The Basilica of Saint Martin is built on the foundations of a Roman temple. It is in St. Martin’s Basilica that you get an insight into the great history of Bingen, when you realise that the Romans built a temple on exactly this site in the years before the birth of Christ. St. Martin’s Basilica was first officially mentioned in 793 in Lorsch Abbey’s list of donations. In 883, the Roman building was destroyed, and was rebuilt and reconsecrated in 1220. When a fire broke out on 14 August 1403, almost the whole church was utterly destroyed. Thirteen years later, a new St. Martin’s Church was built in the Gothic style. As St. Martin’s was a collegiate church, the Barbara building was turned into a parish church in 1505. Subsequently, the church experienced many changes; altars and art treasures were lost or sold. On 1 April 1930, Pope Pius XI awarded St. Martin’s the title of a papal basilica. After bombing in 1944, the vaulted roof of the main nave and part of the high altar collapsed. Today a place of Special beauty awaits its visitors once again.