The history of Bingen (known as the Gateway to the Middle Rhine) extends way back into pre-Roman times, as evidenced by finds of Celtic provenance.

Despite gargantuan efforts, the meaning of the word “Bingen” has not yet been clarified; the name “Bingen”, however, seems to be of neither Germanic nor Roman but of Celtic origins.

There was a Christian community in Bingen very early on, as evidenced by the discovery of an early Christian tombstone belonging to a priest called Aetherius, presumptively dating from 400 CE, found close behind the numerous Roman graves at the Technical Institute. 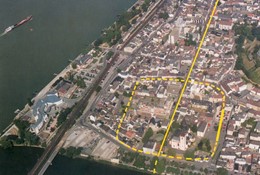 The Romans, impressed by Bingen’s conveniently situated location, built Castell Bingium here at the confluence of the Rhine and the Nahe. In Bingen, the Roman road coming from Mainz divided into two. One road led further downstream to Koblenz, while the other went over the Hunsrück hills to Trier. When a culvert was being dug near the graveyard and the Cultural Centre, the remains of a former Roman bridge built in 77 CE were discovered.

On 14 June 983, Emperor Otto II, at the Reichstag in Verona, out of gratitude to his Chancellor, Archbishop Willigis of Mainz, transferred the seigneurial rights over the town of Bingen and the surrounding lands to the latter. This gift is also known as the Imperial Enactment of Verona, which after the 2nd World War formed the historical starting point for the mutually supportive relations between the Province of Verona and the present-day county of Mainz-Bingen, in which the city of Verona and the town of Bingen are included.

In 996, Otto III enlarged this gift, by adding a part of the Imperial Forest in the Hunsrück hills, the present-day Bingen Forest.

During the conflicts between the Papacy and the Empire, here’s a date that stands out: on Christmas Eve 1105, Emperor Heinrich IV was imprisoned by his son Heinrich V in Klopp Castle, so as to compel him to abdicate. 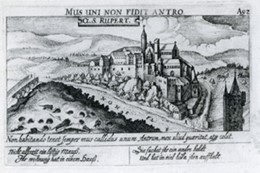 In 1147, Rupertsberg Nunnery was founded by Hildegard von Bingen. This outstanding personality of the Middle Ages attained high renown in her own lifetime as a mystic, a naturalist, a doctor and a scholar.

In the period when the Emperor’s throne was vacant, Bingen participated in the major city leagues. Its armed forces were continually involved in military action, against pirates on the river and brigands on land, and helped to keep the region peaceful.

In the Customs War of 1301 between King Albrecht I and the Rhenish Prince-Electors, Bingen together with its castle was besieged and conquered; Klopp Castle itself was destroyed. In 1424, an agreement transferred Bingen to the Cathedral Chapter in Mainz.

In 1403 and 1490, Bingen was burned almost to the ground. In the 30-Years War, the town suffered severe destruction. The soldier of Louis XIV, too, set the town in flames. In the 18th century, the storms of war swept over Bingen. In the 19th and 20th centuries, Bingen (which belonged to the Grand Duchy, and later on state of Hesse) shared the fate of the German polities and subsequently of the Third Reich.

The wars of the past 150 years, with all the devastation they wrought, particularly on the history-steeped older parts of Bingen, are still very evil memories.

Quite a few celebrities were born in Bingen or lived here, like the great poet Stefan George. 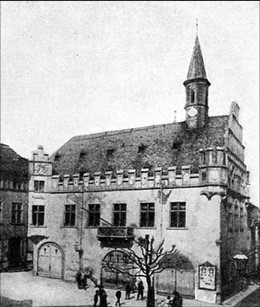 Following several incorporations of other municipalities, Bingen nowadays comprises not only the town centre, but also seven additional districts. In 1969, Bingen was elevated to the status of a major county town. The population totals around 25,000.

For centuries now, wine has been grown and traded in and around Bingen. Well-known vineyards, like Scharlachberg, Schwätzerchen, Bubenstück and Sankt Rochuskapelle, have acquired an enviable reputation for quality both in Germany and abroad. The beverage industry located in Bingen constitutes a vry significant commercial factor. This development has persuaded quite a few eco-friendly branches of industry to put down roots in Bingen. For example, Germany’s leading vendor of amusement-with-prizes equipment and compact-size gambling machines is located in Bingen, and within the framework of its product portfolio is active in development, production, service and sales. One large firm supplies upmarket cookware for a healthy lifestyle. There are also a series of sound mid-tier companies in other lines of business. 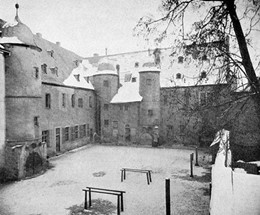 Following the expansion of the European motorway network, in which Bingen constitutes a traffic hub, in recent years particular attention has been paid to designating residential, commercial and industrial areas. Besides the optimal rail and road transportation links, the nearby Rhine-Main Airport and German and international shipping lines continually dropping anchor in the town should not go unmentioned.

Bingen can also draw upon a rich tradition of welcoming tourists: it’s an exceptionally popular destination for day-trippers and holiday-makers. High priority is attached to leisure facilities. In the heart of the town is the Rochusberg hilltop park, with a forest educational trail and a keep-fit trail as well. The hilltop swimming pool, with a magnificent view of the Rhine, is another attraction. Bingen’s Municipal Forest has an area of around 2,000 hectares. It is a popular excursion spot for the local people, for guests from both Germany and abroad, and for the people living in the Rhine-Main area. Delightful circular rambling trails are conveniently signposted. The Bingen Wine Festival, celebrated at the first weekend in September, attracts thousands of visitors. The pilgrimage to St. Rochus, which takes place on the first weekend after 16 August, is likewise famous way beyond the town of Bingen itself.

There are town-twinning relations with Prizren in Kosovo (former Yugoslavia), Anamur in Turkey, Kutná Hora in the Czech Republic, Hitchin in England, Nuits-Saint-Georges and Venarey-les-Laumes in France. There are friendly relations, too, with the Province of Verona in Italy.

But Bingen is also a town of schools. Primary and secondary schools, a state secondary modern school, grammar schools, vocational schools, a technical collage, all exemplify the multifaceted array of different educational institutions. Worthy of particular mention are the adult education centre and the music school as training and skilling institutions for students from far and near. At Bingen’s sports centre in the suburb of Büdesheim, recent years have seen the construction of some impressive sports facilities, tennis halls, a sports hall with international playing areas and an indoor swimming pool. 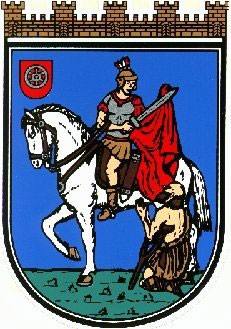 The upgrading of the pedestrian zone, which is about 1,000 metres long, has significantly enhanced the town centre’s urban environment. Attractive retail outlets are ideally suited for some leisurely shopping.

All in all, the town of Bingen am Rhein, though it has evolved on history-steeped ground, has remained youthful and vibrantly dynamic. It functions as a central hub, with a catchment area of around 50,000 people.