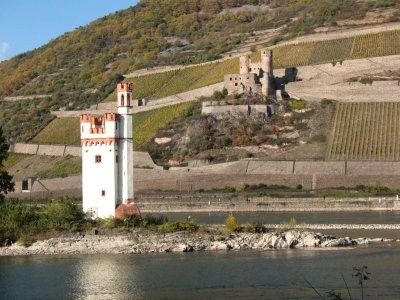 From toll tower and signal tower to world-famous Landmark.

Historical traditions and legends are woven around the tower on the small island in the middle of the Rhine. We can safely assume that the Romans built a small fort here. Under Frankish rule, however, it fell increasingly into disrepair. Only when Hatto II took power in the Archbishopric of Mainz in 968 and became Bingen’s sovereign ruler does the island tower re-emerge from the mists of history. Though up to then Bingen had been de facto an independent town, the harsh rule of the new regime now meant increased levies and strict subservience on the part of the populace. The name “Mouse Tower”, which is recorded for the first time in 1516, is derived from its function as a guard tower (Middle High German “musen” = lie in wait). However, in the 16th century, the tower was linked to the legend of Bishop Hatto, who was said to have been eaten alive by mice as a punishment for his mercilessness. In 1298, the tower was incorporated into the customs protection system of Ehrenfels Castle. In 1689, it was destroyed by French troops. Its importance was forgotten until 1855. The Prussians built a signal tower on the island for shipping, which can still be seen today.